The course is intended for active participation by professionals, students from specialized music schools and for experienced amateurs with previous experience with Early Music. Active participation is also possible for players of modern instruments with a serious interest in music of earlier periods.

Passive participation is possible for anyone who is interested in baroque and renaissance music and its performance practice. Passive participants can follow the lessons in any of the classes and have free access to concerts and lectures.

For teachers in primary and secondary schools, we offer additional lessons in a course adapted according to the requirements for accreditation within the Ministry of Education’s system for further education for teachers (DVPP). The exact timetable and the calculation of additional lessons within the DVPP programme will be prepared individually based on the participant’s previous experience. Please contact us on musacad@email.cz for more information.

In the classes we will look at each piece and its performer as a whole, and work from there, be it from the side of musical interpretation, vocal technique, pronunciation, rhetoric and delivery of the text. All of them serving the purpose of giving a more authentic performance and making the student a more comfortable and confident performer, ready to explore his or her own possibilities. The musical choice can range from late renaissance madrigalists to Mozart, with a preference for the solo vocal repertoire from the Early Baroque Italian music and Renaissance solo vocal repertoire from England and Spain. We will work on ornamentation and style (messa di voce, trillo, gruppo, esclamazione, ribattuta di gola, cascata, diminution, etc.).

The class is intended for players of baroque or renaissance traverse flutes. Also welcome are players of modern flute and other types of flutes, who want to embark on traverso. Within the class, individual lessons will be given especially to the baroque repertoire and to the ensemble performance of baroque but also renaissance repertoire and consort (instruments will be provided).

This course addresses not only lutenists and players of the baroque guitar, but also guitarists with no prior experience with playing on historical instruments. There will be instruments to borrow on-site. Any repertoire is welcome. Lecturer also attends the teaching of ensemble playing on renaissance lute and in mixed (“broken”) consort. 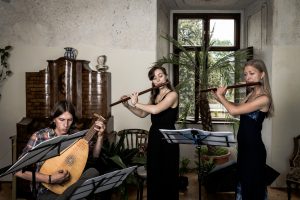 Lessons will be in the stylish baroque château in Kunín

Lessons will take place day-long in the stylish baroque château in Kunín from August 18 to 21 (some individual lesson possibly also 17 and 22). Schedule will be published later.

Opening of the ensemble classes will depend on sufficient number of participants. Basic tuition fee allows participation in 2 or 4 blocks of one type ensemble. There is possibility to order more lessons. Repertoire for ensembles will define lecturers. 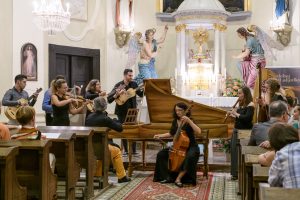 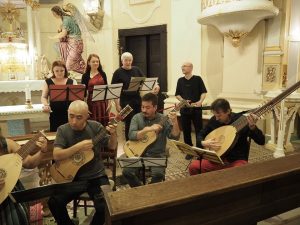 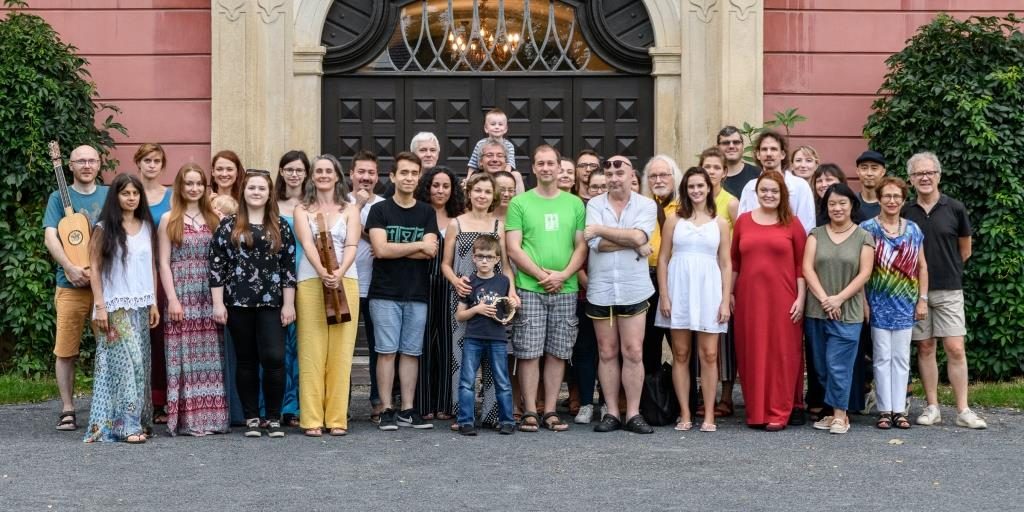 Passive participants can follow the lessons in any of the classes and have free access to concerts and lectures.

There is a possibility to order more lessons beyond the basic fee. Price unit 990 CZK (ca. 39 EUR)* includes

* Discount 20% from lessons beyond the basic fee for students up to 26 and for members of Czech Lute Society (discounts is possible to combine).

We are offering accommodation in two dormitories of the University of Veterinary and Pharmaceutical Sciences Brno, rather modest housings with 3 to 6 beds in one room. If possible, we will try to avoid occupying the rooms fully. Sanitary facilities are in the corridor, there is access to little kitchen. Price for person / night with breakfast: 290 CZK /210 CZK without breakfast ( ca. 11,50 EUR with / 8,50 EUR without breakfast). 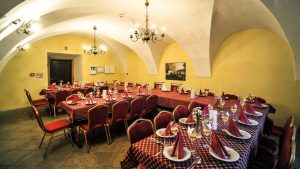 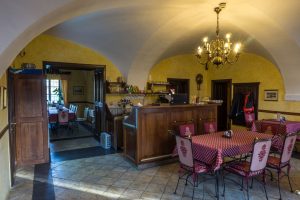 Breakfast: included in the price for accommodation (optional)

Lunch and dinner: daily menu or a la carte, ordering and payment individually in the restaurant.

Filled in application form has to be sent by e-mail on address: musacad@email.cz.

Tuition fee and price for accommodation is necessary to pay right after receiving of confirmation, at latest on August 10, 2021.

In the case of cancelling of courses because of  COVID-19 situation, will be all the fees payed back. Pay back after the cancellation of application on the part of participant will be arranged individually.  We reserve the privilege to keep 40% of tuition fee.

MORE ABOUT THE LECTURERS 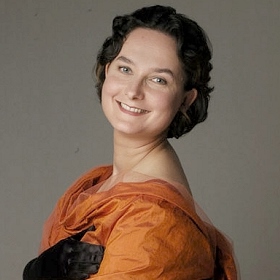 Bettina Pahn was born in Erfurt. She studied initially violoncello and continued studying singing at the Music Academy “Hanns Eisler” in Berlin und in Frankfurt with Elsa Cavelti. Since June 2012 she is trained by the internationally renowned Dutch vocal coach Margreet Honig. Her agile lyrical soprano voice soon arose interest from various conductors within the genres oratory, early music and Lied.

The German soprano established herself as a leading singer for historically informed performances through concerts and recordings with Ton Koopman, through concerts at important venues such as the Carnegie Hall in New York and the Concertgebouw in Amsterdam, and through guest performances at the Händel Festival in Göttingen and at the Schleswig-Holstein Music Festival. So far four volumes of CDs with Ton Koopman have been released, devoted to the music of Dieterich Buxtehude. The second volume Opera Omnia VII – Volume 3 was awarded the Echo-Klassik 2009 reward. Between 2012 and 2014, she recorded numerous solo cantatas by Buxtehude under the direction of Ton Koopman.

Bettina has a long-standing successful cooperation with her duo partner, the Echo laureate Joachim Held (lute). The duo performed with great applause at the Händel Festival in Göttingen in 2007, at the Schwetzinger Festspiele in June 2008, and at the Schleswig-Holstein Festival in August 2009. Together with the Ensemble Sarband the performed at the Händel Festival in Halle in 2011. Their first CD, comprising German folk songs, was released by Hänssler in the autumn 2007, and in July 2009 followed the CD Stille Nacht (Silent Night) with old German Christmas songs. In July 2011 they followed an invitation to the Innsbrucker Festwochen für Alte Musik. For 2015 they are invited to the Itinéraire Baroque festival in Périgord.

In September 2014 Bettina Pahn and Tini Mathot (pianoforte) recorded a CD for the label Naxos with songs the of the second generation of the Berlin “Liederschule”. In 2015 she recorded Carl Philipp Emanuel Bach’s secular songs for Naxos. In 2020 and 2021 she will record a CD with Telemann cantatas and chamber music, as well as a CD with compositions by Fanny Hensel and Clara Schumann for Hänssler Classic. 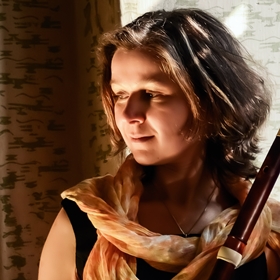 Marta Kratochvílová studied flute at the Conservatory in Pardubice and then at the Janáček Academy of Performing Arts in Brno. In 2000 began her studies in France at the Conservatoire National de Région de Strasbourg, where she specialized in baroque and renaissance flute with Jean-François Alizon and Nancy Hadden, and chamber music with Martin Gester and Patrick Blanc. She has participated in masterclasses and workshops by prominent figures such as Paul McCreesh, Barthold Kuĳken, Jan Latham-Koenig and Sir Neville Marriner. In France until 2010, she played baroque and renaissance flute extensively in the ensembles Le Parlement de Musique Strasbourg, Bohemia duo and NotaBene. She also performed renaissance workshops (Ferrara, Munich, Stuttgart, Basel) with a consort of traverso players from Strasbourg.

Today she lives in the Czech Republic and performs regularly throughout Europe. She appears in mostly chamber and solo projects with artists such as Jan Čižmář, Karel Fleischlinger, Joel Frederiksen, Martin Jakubíček, Petr Kolař, Ján Krigovský, Marcin Świątkiewicz, Marc Vonau, Petr Wagner, and with the ensembles {oh!} Orkiestra Historyczna and Plaisirs de Musique, of which she is a founding member. She is also artistic leader of the renaissance flute consort Tourdion.

As a teacher with many years of experience she is invited to presentations and masterclasses throughout Europe; she teaches also privately baroque and renaissance traverso playing and interpretation.

Marian Friedl, musician, ethnomusicologist, pedagogue, member of several music projects of various specializations, in which he sings, plays the double bass, folk flutes, bagpipes, clarinet, small dulcimer and other instruments. He has performed on more than two dozen CDs, often with leading performers from the Czech scene and abroad. In 2014 he recorded, for example, the album NOCZ and Iva Bittová (Hevhetia), in 2016 Divé Husy with Jitka Šuranská and Martin Krajíček (nominated for the Anděl Music Award 2016) and in the same year the album Mateřština with Jiří Slavík (Anděl award 2016 in the World Music category). He embodied his personal vision of Moravian World Music in his self-conceived project Lambs and Wolves; the album of the same name won the Anděl 2017 award in the Folk category. In 2019 he released his solo album Beskydská Odysea (Indies Scope), the neo-folklore project Píseň ZEMĚ (Animal Music), and also performed as sideman on albums of the Norwegian-Czech group NOCZ and Choir (Hevhetia) and in the project Slovak Dances of the composer and conductor Peter Reiner (Naxos). 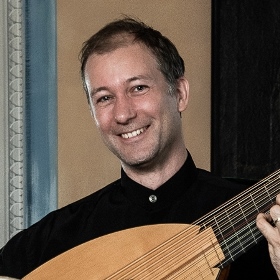 Jan Čižmář is a versatile performer focusing on historical plucked instruments. He performs regularly in Europe, Asia and the USA with ensembles such as Royal Concertgebouw Orchestra, Orchestra of the Age of Enlightenment, Orchestra of the Eighteenth Century, Rotterdam Philharmonic Orchestra and Capella Cracoviensis, and under conductors such as Frans Brüggen, Christopher Hogwood, Giovanni Antonini, Yannick Nézet–Séguin and Christina Pluhar. He appears also as soloist with of baroque and renaissance repertoire, and is the artistic leader of the ensemble Plaisirs de Musique.

After graduation in guitar and musicology in his native Brno he studied at the Royal College of Music in London, where he began playing the lute in the class of Jakob Lindberg. He continued his studies at the Royal Conservatory of The Hague with the teachers Nigel North, Joachim Held, Mike Fentross and Christina Pluhar.

He was the founder and editor of the Czech guitar magazine Kytara and contributes regularly to other musical periodicals. He is also intensely involved with publishing and research activities in the field of early music.

Jan Čižmář taught lute and related instruments at the Karol Szymanowski Academy of Music in Katowice in Poland; currently he is teaching at the Janáček Academy of Music and Performing Arts (JAMU) in Brno and at the Academy of Ancient Music at Masaryk University in Brno. He regularly gives courses and masterclasses in Europe and overseas.